From the first, we have been keen to steer the group in the direction members need and want. To that end we had a discussion and agreed on two things for next time.

Feels like we’re getting the hang of this! At our first meeting everything seemed strange and new. A bit stressful if I’m honest.

Getting organised, opening the building, getting the heating right, where to sit, what to speak about, meeting new people, making them welcome. It was early days for a new group.

Winter weather, Christmas holidays and the dark days of January all took their toll. Burn’s Night gave those with a poetic leaning, a glimmer of inspiration. Our first meeting of 2019 brought new faces, different experiences and new ideas for discussion and exploration.

March was our second of 2019. I feel we are beginning to tune into peoples’ needs and move ideas forward.

I’m relatively new to all of this and I was fascinated to discover that there are all kinds of things out there to help budding writers:

Sure, there are many aspiring new writers, scarily many, but help is there and accessible.

I thought I was doing well ordering my shopping online but words like Scrivener and AutoCrit have now entered my vocabulary, alongside Creative Writing Ink and WordPress. All have been stored away for further investigation.

The other thing that became immediately apparent is that people are happy to share, to listen and be supportive. I for one had used storyboards to teach young children but it had not crossed my mind that I could use them to develop my own writing.

For instance, at the February meeting Andy Frazier showed us an example of how he uses a story board for script writing. Check out Andy’s blog, which gives a basic introduction.

At the beginning of our early group meetings we quickly gave a brief history of what we were interested in and, perhaps, current projects. This helped us get to know each other and our aspirations.

One group member brought along a folder containing her old writing notes. I’m not even sure if she’d had time to look through them. But it’s surprising how looking back can refresh your ideas.

By the end of the evening she had shared a piece of work that mattered to her. We were glad she found the confidence to do that because it was a wee hidden gem, which we found, mattered to us too. It was a powerful piece, well considered, thought provoking and relevant.

Another member, who had not shared her work at this group before, shared a poem she had penned a while back. She is interested in imagery and it became strongly apparent that she has the ability to convey her ideas through this medium. Thank you both! 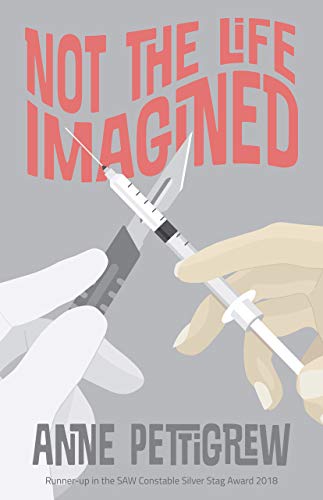 One of our returning members explained that a friend of hers, from another writing group, has recently had her first novel published. Whilst this is not necessarily the immediate aim for everyone, in the first instance, it did make our ears prick up.

I for one was subsequently well impressed to find it, with ease, on the Internet. What’s more, with very favourable reviews! Anne Pettigrew, Not the life Imagined.

The same member had been interested in taking Andy Frazier’s idea from our last meeting, of using song lyrics for the basis of a short story. Her chosen song was Every Breath You Take by The Police.

Now, like me, you may think of the lyrics as coming from the mouth of a broken-hearted lover. Many couples choose it to play at their wedding. Sting had just separated from his first wife to start a relationship with the person who would subsequently become his second wife, when he wrote it.

However, what if you put a different slant on the words? As our member pointed out, they can have a totally different meaning; the words of a stalker, controlling and menacing. Try listening to them again. She used this to great effect in her resulting short story.

If you come along …

Why not drop in and find out what our group is like. You don’t have to do or bring anything, but you can if you like. You can read a short extract from some on-going writing … anything really … and, of course, you can always try our preparation suggestions, below.

At our March meeting we heard:

As one of the short story writers, when preparing, I was stumped for a new idea and, for the first time, Googled “creative writing prompts“.

I can recommend it because there are lots, and I found something that ‘clicked’ with me straight away. Job done!

Mac tells me he wrote a blog on writers-block a while back.

From the first, we have been keen to steer the group in the direction members need and want. To that end we had a discussion and agreed on two things for next time. A logline is a sentence which summarises a TV programme, film or book that states the central conflict of the story. It often provides both a  synopsis of the plot and an emotional “hook” to stimulate interest. And …

Why not come along and share your ideas? Hope to see you soon!